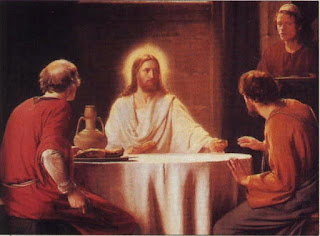 Station #5: Jesus appears to the disciples on the road to Emmaus.

Station #6: He is recognized in the breaking of the bread.

And it came about that while they were conversing and discussing, Jesus Himself approached, and [began] traveling with them. But their eyes were prevented from recognizing Him....
[And] their eyes were opened and they recognized Him; and He vanished from their sight. And they said to one another, "Were not our hearts burning within us while He was speaking to us on the road, while He was explaining the Scriptures to us?" And they arose that very hour and returned to Jerusalem, and found gathered together the eleven and those who were with them, saying, "The Lord has really risen, and has appeared to Simon." And they [began] to relate their experiences on the road and how He was recognized by them in the breaking of the bread. Luke 24: 15-16, 31-37 NASB
With our hearing healed in Station 4, 5 and 6 are all about seeing with the eyes of faith. The road that these disciples travel is one which takes them away from Jerusalem, the place of terrible defeat and broken dreams. Their journey also was taking them away from faith community. When I'm crushed, I just want to be alone. We can't blame any disciples for running away from the trouble that was to find them if they continued to hang out in Jerusalem. Getting as far away as quickly as possible would be the smart thing to do.

What does it mean that, even as I travel in the wrong direction, Jesus still accompanies me? That in all futility and hopelessness, God's love holds me? Think of any and all situations. The fact that God still walks alongside me as Paraclete is true, whether I walk through the darkest valley (Psalm 23:4, NRSV), or suffer public humiliation. (Romans 8: 35)

Don't disillusioned disciples, blinded by pain all around, need a tangible sign, a sacramental act, in which to know and recognize Jesus' presence? Did Luke have Psalm 23 in the back of his mind? The Good Shepherd himself prepares table for us- and is known in the breaking of the bread.