If Easter sort of crashed for you, cheer up. Maybe we can learn something.  I tried but could not connect with a church’s live cast of an Easter Service this morning. I was, instead challenged to affirm Easter and worship God without. Without trumpets, and singing the Hallelujah Chorus, or Christ the Lord  Is Risen Today. Along with an Easter throng. Or without a hundred other things.

The words Thomas Keating, that “God’s first language is silence” are both haunting and helpful. I look for God in the wonders and signs, the pageantry and splendor of Easter worship at church, or even the quiet beauty and joy of an outdoor, sunrise gathering.

Today, it’s the Presence in the sound of sheer silence that brings comfort, consolation. Elijah, the prophet of the supernatural, the one who called down God’s power for all to see, also ended up running for his life, exhausted, hiding out in a cave. And though the lesson is not easy and will not be found on the Prosperity Gospel Channel, there are times when the Presence can’t be found in the thermodynamics of nature or a sound and light show webcast.

Holy One, when all my attempts to recreate the right Easter and to feel your presence fail, give me grace to know your loving presence in the sound of stillness and silence.

Stations of Light: Jesus Rises from the Dead (1) 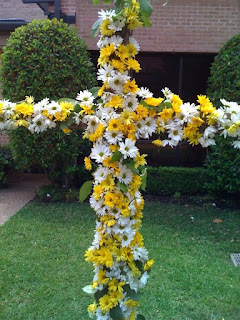 The angel of the Lord said to the women: "Do not be afraid! I know you are seeking Jesus the crucified. He is not here, for He has been raised just as He said." Matthew 28:5b-6a.


Do you find it interesting that, even though no one saw the central event of our faith, we, like the women at the empty tomb, are still invited to bear witness to the resurrection of Jesus Christ? We read it like seeing an empty tomb would have been a good thing. Jesus' total absence begins the story. It's only with the word of the angel, God's servant, that there is a change in narrative. It's an invitation to trust and rely on God's love, grace and faithfulness.

"The desire for certitude is an obstacle to launching full sail on the ocean of trust," wrote Thomas Keating. For anxious, terror-struck disciples not knowing how Jesus left the tomb, the only way forward is to consent not to know, to trust the words of God's messenger. The voices are many who declare otherwise. Our program for security seeks an end to mystery and unknowing. As the gospel Easter song declares we indeed like the idea of "all fear" being gone. But is that the measure of our spiritual life? I hope not. If all fear being gone is what it's about, then I've missed the bus!

Faith accepts the unknown. From Abraham to Moses, from Mary to Peter, we take the next step in the journey not because all our questions have been answered, but because God gives us enough faith to take the next step. It's God's goodness and mercy that chases after us as long as we live- the real measure of faith.

Early on the first day of the week, while it was still dark, Mary Magdalene came to the tomb and saw that the stone had been removed from the tomb. So she ran and went to Simon Peter and the other disciple, the one whom Jesus loved, and said to them, ‘They have taken the Lord out of the tomb, and we do not know where they have laid him.’ Then Peter and the other disciple set out and went towards the tomb. The two were running together, but the other disciple outran Peter and reached the tomb first. He bent down to look in and saw the linen wrappings lying there, but he did not go in. Then Simon Peter came, following him, and went into the tomb. He saw the linen wrappings lying there, and the cloth that had been on Jesus’ head, not lying with the linen wrappings but rolled up in a place by itself. Then the other disciple, who reached the tomb first, also went in, and he saw and believed; for as yet they did not understand the scripture, that he must rise from the dead. Then the disciples returned to their homes.

But Mary stood weeping outside the tomb. As she wept, she bent over to look into the tomb; and she saw two angels in white, sitting where the body of Jesus had been lying, one at the head and the other at the feet. They said to her, ‘Woman, why are you weeping?’ She said to them, ‘They have taken away my Lord, and I do not know where they have laid him.’
When she had said this, she turned round and saw Jesus standing there, but she did not know that it was Jesus. Jesus said to her, ‘Woman, why are you weeping? For whom are you looking?’ Supposing him to be the gardener, she said to him, ‘Sir, if you have carried him away, tell me where you have laid him, and I will take him away.’ Jesus said to her, ‘Mary!’ She turned and said to him in Hebrew, ‘Rabbouni!’ (which means Teacher). Jesus said to her, ‘Do not hold on to me, because I have not yet ascended to the Father. But go to my brothers and say to them, “I am ascending to my Father and your Father, to my God and your God.”  Mary Magdalene went and announced to the disciples, ‘I have seen the Lord’; and she told them that he had said these things to her.  John 20:1-18

Easter Sunday is a day for celebrating and affirming God’s love in Jesus Christ! And it’s a day to give thanks to God for giving us life now and forever! I need to catch myself. The trap of many Christians (including me!) is to proclaim Easter Sunday faith as a certainty. The two are not the same. Remember the words of John where “the other disciple” not only saw,but also, “believed.” In this case the disciple saw an empty tomb and had faith that there was more at work than a missing corpse.

Mary supposed that Jesus’ body had been taken and He was gone forever. Jesus was gone, at least as Mary had known him. Mary’s song might have been “I’ll Be Seeing You in the Old Familiar Places!” Like Mary, my first reaction to change is to cling to the familiar.We cannot let the strange and unfamiliar stretches of our journey obscure God’s amazing and wondrous love for us. Especially in the darkness of a pre-dawn Easter, we, like Mary, may discover that the living Christ is closer to us than we could ever imagine!

I never suspected Resurrection
and to be so painful
To leave me weeping
With joy
To have met you, alive and smiling, outside an empty tomb
With regret
Not because I’ve lost you
But because I’ve lost you in how I had you—
In understandable, touchable, kissable, clingable flesh
not as fully Lord, but as graspably human.

I want to cling, despite your protest
Cling to your body
Cling to your, and my clingable humanity
And to cling to what we had, our past.

But I know that…if I cling
You cannot ascend and
I will be left clinging to your former self
…unable to receive your present spirit.

“The more occupied we are with the things of God, the more likely we priests are to forget what God isall about- and the more complacent we're likely to become. That's the story of Jesus. Who got rid of Jesus? The priests- who else? The religious people. That's the terror of the Gospel, see?”  Anthony De Mello, S.J., Rediscovering Life

Today begins Holy Week, and marks Jesus’ arrival in Jerusalem for the Passover festival. Believers everywhere are invited to see ourselves in the events of Jesus’ last week on earth. Much of the Passion of Jesus (his last days) included the abandonment of his closest, most beloved friends, his disciples. The “terror” that is referenced by De Mello is the honest realization that we are no great improvement on the people who put Jesus to death. We are infinitely closer to everyone we meet in the Gospels than we are like the Lord.

Still, in Holy Week, we can learn and receive something enduring and life-giving about ourselves and God. We can learn that our love has a long way to go beyond just doing good to those who do good to us. We can realize that what passes for love in this world is often more about control and payback. We can discover that in our worst moments – in harming others, and being harmed by others, God is the only One who will never leave. God doesn’t give up, take the ball, and go home. God’s love in Jesus Christ is faithful- and forever. The words of Jesus are both life-giving and life-changing: “Father forgive them…Into thy hands commend my spirit. Listen.
- April 05, 2020 No comments: