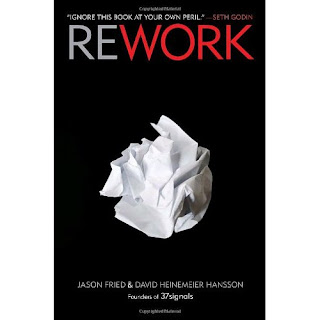 Rework by Jason Fried and David Heinemeier Hansson is a fun to read volume which shares the wisdom gained from the authors' starting 37signals. Released in 2010, it's a refreshing approach. Instead of drawing conclusions from the prescribed laws of business, the approach is simply sharing what has been learned inductively to be true.
Written like a blog with plenty of art, each "post" is somewhat autonomous, even though they are organized under chapter headings like Takedowns, Promotion, Hiring, Damage Control, Culture, and more. One of the better posts is on using an economy of words to improve the clarity of your message. They cut the book from 57,000 to 27,000 words and thus, the book reads like a charm.

The book debunks conventional myths and sources of needless stress, such as workaholism, meetings, growth, planning, out-doing the competition, decisions and experience: "How long someone's been doing something is overrated. What matters is how well they've been doing it." Accordingly, ASAP is poison: using this inflationary word will "create artificial stress, which leads to burnout and worse."

Contending that resumes are ridiculous, the authors argue that the cover letter is a much better test: "If the first paragraph sucks, the second has to work that much harder. If there's no hook in the first three, it's unlikely there's a match there. On the other hand, if your gut is telling you there's a chance...then move on to the interview stage."

Writing itself, the authors explain, is making a comeback everywhere, because whether it's an e-mail, text-message, blog or website, writing "is today's currency for good ideas." Moreover, since writing skills pay off whatever you're doing, hire the best one. A good writer is a good thinker and clear communicator, knowing how to make things easy to understand for their audience.

You can enjoy a fairly quick read of Rework the book; however, the ideas in it will prompt reflection and will challenge you to rethink old maxims which have proven to be somewhat useless in practice. 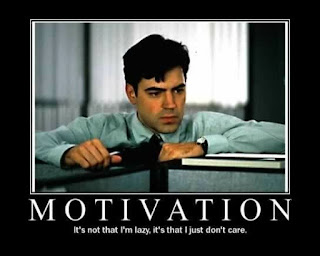 Two streams of the leadership genre have to do with either a leader's spiritual center or, how to win some more friends and influence some more people. This second one is by far the most popular, but leading from the outside with hopes of winning others over is dicey at best.

Even though I recently bought a book by John Maxwell, none of his "proven steps" persuade me to read an almost 300 page book written about them. Henri Nouwen is much closer to my true north- more useful too.

How to be a better leader is a draining subject, because most of the advice is about how to fit into someone's grid. If you take their course or read their book and follow their particular regimen, you will be a more effective leader. If we only follow their steps for success, we will also be better liked and more people will comprise our "following."

Just assuming we could measure this stuff, then what would we have precisely? Is this what success looks like? Moving ourselves and others along on a grid or spread sheet?

The symptoms of our living to please everyone's expectations? Disappointment, fatigue, boredom, and burn out. In regard to others that live and serve with us, the paradigm ending in our success makes the contributions of others about us, not them. Others are manipulated and they too may eventually burn out. But we don't know the intentions of others, and we don't control their behaviors or choices, so why base our effectiveness as a leader on what we really have no control over?

A good example is the mentoring relationship, as we cannot cajole anyone into our being their mentor. Like many relationships that are based on our freedom to choose, a more helpful course is to take responsibility for ourselves. It's about self control. This is better than wasting our energy trying to move others where we think they should go. The only one we have any hope of changing and improving is our own self!! Too, the Christian gospel is about the Holy Spirit forming people the way they should go. That, too, is a God- work. 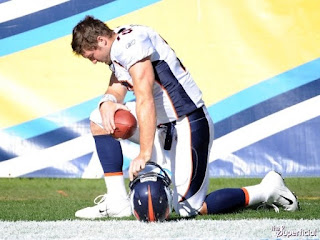 I grew up in a musical family and a drummer, Buddy Rich was my idol. His single stroke roll was a work of God, at least as I witnessed his incredible performances. His record, A Different Drummer seemed to be a departure from so much of the jazz -rock that he had been doing in the preceding years. Rich's talent and precision differentiated him from drummers of all styles.


Which brings us to Mr. Tebow, a different kind of NFL QB. He has reemerged nationally as quarterback with the Denver Broncos. The renewed fame begins with leading his team to the playoffs and in the playoffs, but is fed by the criticism of some who may call themselves "experts" at the position he plays. For these folks, "just win, baby," isn't enough. For example Sir Charles declared earlier this week, after Denver's last win, "the national nightmare continues." I know he's not an expert so it must be comedian.

Tebow's technique is not prototypical, nor his frame, which allows him to run first, pass second. Such an approach is a problem for other, more frail quarterbacks, and their coaches. There's also the matter of speaking regularly and persistently of what are supposedly personal faith matters. That he shares his faith in the Lord publicly shouldn't by itself diminish his authenticity. But for many, it is just one more way he is different, and probably makes his interviewers a little uncomfortable.

If his season were long over, there would be few interviews and little interest. So winning has sparked the Tebow craze for sure. But I think there's more to it. In leadership theory, we hear about the self-differentiated leader. They are the ones who know and accept themselves for who they are- with all their limits, and their gifts. Self acceptance is more about accepting my true self as formed and loved by God. (Is. 43:1, 44:1) So that when the false statements that we tell ourselves cease, as well as the stuff we use to prop-up our lives, we are, bottom line, all very different and unique but equally loved by God, in an overflowing kind of way.

Love allows differences in us and in others. And those differences are what make our world beautiful, and exciting, not boring. "And I say to myself, what a wonderful world."