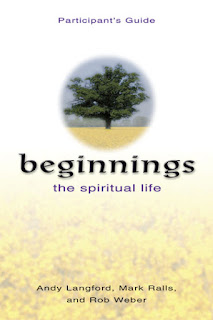 The first of our 8 Wednesday group sessions of Beginnings- The Spiritual Life began last night at A Moveable Feast, 6:30- 8:15 p.m., 9341 Katy Freeway in Houston. Our next session is Monday, March 30 (instead of next Wed.), FYI. Guests are welcome to come and preview. The food is great (and free) and then there's a talk followed by small groups.

The goal of our group time is simply put, to begin a journey led by the Spirit, the Guide. Just as Jesus was led by the Spirit into the wilderness (Matthew 4:1), so we are invited to start a spiritual journey under the leadership of Holy Spirit.

Each part of the pilgrimage is toward God and with God. Habits, practices, movements are offered and available for the taking. The first "habit of the heart" is willingness to let go. What are the expectations of God, Holy Spirit, spiritual life, that I need to release in order to start the new that's just ahead? What of my own stuff do I need to unburden to receive this newness, the life of the Holy Spirit?

For the daily exercise, be aware each day of the wind. Do something that will help you actually be attentive to the power and life of the wind (spirit).

Come Holy Wind and Breath, Come Holy Spirit. Hover over and around and within. Make new ways out of the old. Bring to life, refresh, awaken, move us in love, heal us in your goodness, bless us with the willingness to venture, begin, learn- every day.

Really, Are We All that Different?

It's amazing how suffering can bring us together like nothing else. "Time and chance happen to us all," the Preacher writes in Ecclesiastes. But the subject of our own choosing is what's more captivating.

I mean, why do we do some of the stupid things we do? We deny what others see in us, pretending that either they've got it wrong or they don't see how unique and different and special God knows we really are. But wisdom says we're not that different!

While time and chance happen to us all, it's our denial, refusal, and inability to see the obvious. The toxic supervisor shows their underhandedness even before the potential hire is made. Future staff colleagues are put-down. Red flag! Not to worry. I'm different. A clergy leader has a clear history of sabotaging the work of others, but then, we think we're different, so we'll choose to work with them in spite of the evidence that we'd be better off without their "career help."

Or we deny signs of burnout in ourselves: apathy, meaningless, boredom, lethargy, etc., etc. Somehow, we are above it, we tell ourselves. We're not like those other clergy leaders who had problems with this sort of thing. We're taking precautions. We're good, so good that we don't even need help. We're above it all.

I hurt for my clergy colleagues who too often like me, think that denial of my true self and attention to the false self is necessary to get ahead in the church business. Because such denial is based on self-hate and anger, not love. And anger leads to bitterness, resentment, and finally the death of sloth- total indifference.

So the next time you're tempted by the illusion of your own superiority, remember what got you here in the first place: not your moral goodness, ability, or political acumen. In spite of what anyone has told you, it's God's grace, a grace that loves and heals and liberates even and especially what we deny in ourselves.
- March 23, 2009 1 comment:

The thought of Paul in Arabia has come to mind. I'm living some questions that perhaps I've avoided. It's too easy to construe Paul's hermit sojourn as a rugged, individualistic American would. But I have to think that the call he received to go among the Gentiles with the Jesus Gospel required a rethinking of his life and a remaking of his person and this could only begin with a profound self emptying in the desert.

Paul's being a super-achiever is among the several continuities between his life in Judaism and being an apostle to the Gentiles. Paul is also zealous, whether as a Pharisee- teacher- persecutor, or as a Christ-believer and persecuted apostle. My interpretation- Paul apparently still kept and honored the Torah for Jews like himself as well for Christ believers who were born into Judaism, such as Timothy. The conflicts came when he didn't require Gentile believers to observe Torah.

So what's the big difference in Paul the person? It's answered, in part, by his going to Arabia. For three years. There was safety from the threats of the extreme wing of Judaism that he once represented, as well as protection from Roman authorities. The implication of the text is that Paul went away immediately to seek God. And I like the fact that the question is left to our imagination.

To seek God only is our calling, because we cannot offer what we do not have. So it is with finding a new spiritual director. If I don't learn something in my own search, how can I hope to understand what that's like? If I'm so unfamiliar with the energy, pain and struggle to find genuine Christian community, how in the world can I companion another on a similar journey?
- March 09, 2009 No comments:

That empires avenge their once-conquered lands with ferocity multiplied is just one insight gained from lingering with In the Shadow of Empire: Reclaiming the Bible as a History of Faithful Resistance, edited by Richard A. Horsley. The book chronicles the often forgotten theme of empire from Egypt of Exodus to the Patmos of Revelation. The reference to re-conquest is not about the story line in the Star Wars epic, but rather to the treatment of Roman-subjected peoples who rebel, such as what Jerusalem suffered in the time of the Jewish Revolts of 66-70 A.D.


The volume features writing by Gottwald, Brueggemann, Crossan, and Horsley, to name a few. While I found the chapters covering the Old Testament narrative helpful, those chapters covering the New Testament were for me filled with new discoveries. From everything to demon deliverance to feeding the multitudes, there are nuances with empire that the chapter on "Jesus and Empire" uncovers.


More discoveries await the reader in Brigitte Kahl's chapter, "Acts of the Apostles: Pro(to)- Imperial Script and Hidden Transcript." In the past, I have discounted the Luke-Acts narrative as empire friendly, and never considered it as a kind of "safe" and orderly account of Jesus and Paul needed for Christian survival in and among hostile and oppressive Roman authorities and territories. It also explains some of the many differences between the Letters of Paul and his work in Acts.


But the topic, the often forgotten theme of empire throughout biblical history, is what I found most riveting. The presence of empire enmeshed in the biblical narrative is the pink elephant in the room when it comes to our Bible study and preaching in the church. Especially when it comes to Jesus' Roman century, we have romanticized empire. For example, how many have heard about the glories of the pax Romana as nothing more or less than the best time for a messiah, a deliverer, to enter human history?


Christ followers who were burned alive under Nero or the churches of St. John's Revelation a generation later would have not seen the pax Romana as a great gift, but as propaganda for an empire whose terror and oppression resembled a beast. All the amazing Roman technologies developed were mostly used for domination, not liberation; any benefits were seen by the few. Conquered people were enslaved, made refugees, and paraded back in Rome in order to prove the success and to warn others of the might of the Empire. The conquered Judeans from the Jewish War serve as such an example.


While the subject of the book is weighty, you will find the essays meaty, worth quality study time, and an excellent resource to deepen Bible appreciation and understanding. This book may encourage us to delve into primary sources like Josephus, Philo and others. Reading In the Shadow of Empire may also prompt us to rethink, if not re-read much of the Bible, especially the New Testament.
- March 03, 2009 1 comment:

How to Live with-and without- Anger: The Words of Jesus

You have heard that it was said to those of ancient times, “You shall not murder”; and “whoever murders shall be liable to judgement.” But I...