Did the 'Same Crowd' that Waved Palms Later Condemn Jesus? (2) 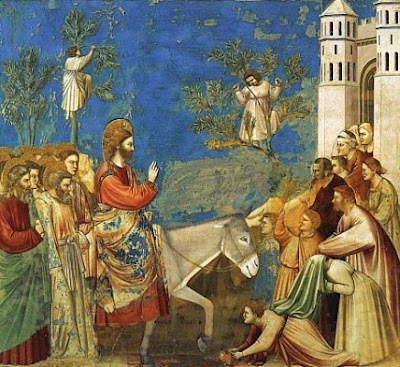 To summarize, it looks like the crowd on Palm Sunday is associated with those sympathetic to Jesus, as Luke mentions "a whole multitude of the disciples" and John mentions those who had "been with Jesus" at Lazarus' resurrection, who continued to testify to this act. Both Luke and John mention the presence of the Pharisees, either as those in the crowd itself, or as onlookers. Matthew and Mark offer the least help in naming the participants.
Jesus' sentence of death before Pilate is what now concerns us. It's especially important to consult the Gospels themselves to see who was in the crowd before Pilate, the group who pronounces the judgment of death by crucifixion (a Roman punishment). There are plenty of inconsistencies in the accounts with actual Roman law as it was supposedly practiced in the time of Jesus, and a great resource in this area is the classic, The Trial of Jesus by Chandler. Here, however, we're just trying to answer the question as to the make-up of the crowd that shouted "crucify" before Pilate.

We can pretty much take the twelve disciples from this seen. Judas has already met his end in Matthew 27: 3-10. In Matthew 26:56, Mark 14: 50, the disciples scatter. Although Peter follows at a distance at first (Luke 22:54), he, too, eventually leaves the High Priest's courtyard after his three-fold denial (Matthew 26: 75, Luke 22:62). In John, Peter is accompanied by "another disciple," since "that disciple was known to the High Priest." John 18:15

Gone from the crowd is also any mention of the Pharisees, though they are there in some of the accounts of the Triumphal Entry. Their warnings on Palm Sunday become fulfilled during the arrest and trial. The Pharisees, the teachers, who later become the rabbis of Judaism, are not the power brokers in the story. You might even consider their warnings on Palm Sunday to be akin to a "word to the wise."

In John, after Pilate questions Jesus the first time; he presents Jesus to the Jewish authorities, and it's the "chief priests and the police" who first shout 'Crucify him!' Crucify him!' (John 19:6) In John 19:14-15, when Pilate, after his second and final questioning of Jesus, says to the Jews, with dark irony, "Here is your King," the narrative continues, " They cried out, 'Away with him! Away with him! Crucify him!'" (Note "The Jews" in the NRSV is translated as "the crowd" in the Contemporary English Version)
From the above account(s), the temple authorities really take the leading role, all the way to the last words of the "crowd" in John 19:16. The accounts firmly place a primary role to the chief priests, the elders, and their security force made up of Temple police, and Roman soldiers. The rest of the crowd's make-up doesn't appear to be a concern of the Gospel writers. And nowhere do any of the Gospels state that the crowd before Pilate is the same group as that of the Triumphal Entry.

In comparing these two accounts in the Gospels, about the only thing I can conclude is that on Palm Sunday, it seemed to be the disciples day, whereas; on Good Friday, the voices "Crucify him!" prevailed. Luke 23:22 But these voices were led by the Jewish Temple elite, not disciples, and not even the Pharisees. Granted, it sounds cool to say that the same crowd that welcomed Jesus as their king a few days later shouted "Nail him to a cross!" But to do that, you have to go beyond what the text actually says. Further, there is no conspiracy that the writers would intend us to see the two crowds as one, not with the crowds of disciples and any sympathetic Pharisees running away from what was to happen to Jesus and anyone connected to him.

The Call to Repair

In Reparations: A Christian Call for Repentance and Repair  (2021),  Duke L. Kwon and Gregory Thompson present the biblical witness to fully...