Faith is about taking the next step (9) 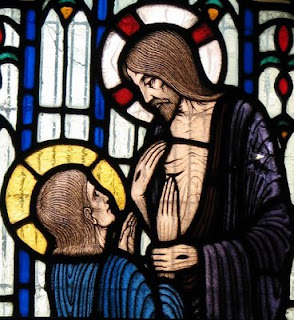 But Thomas, one of the twelve, called Didymus, was not with them when Jesus came. The other disciples therefore were saying to him, "We have seen the Lord!" But he said to them, "Unless I shall see in His hands the imprint of the nails, and put my finger into the place of the nails, and put my hand into His side, I will not believe." And after eight days again His disciples were inside, and Thomas with them. Jesus came, the doors having been shut, and stood in their midst, and said, "Peace [be] with you." Then He said to Thomas, "Reach here your finger, and see My hands; and reach here your hand, and put it into My side; and be not unbelieving, but believing." Thomas answered and said to Him, "My Lord and my God!" Jesus said to him, "Because you have seen Me, have you believed? Blessed [are] they who did not see, and [yet] believed." John 20:24-29, NASB
I used to think that "having faith" meant that I would have all the faith I would ever need for a lifetime. What does it mean for disciples to be honest with their lack of faith? It's really about taking the next step, and we have a wonderful picture of what this looks like in Thomas' encounter with the risen Christ in this the Ninth Station of Light.

Much is made of Thomas not being present at Jesus' first appearance in John 20:19-23. Thomas missed it and a third party witness was not going to remedy his problem. He demanded to witness Jesus, crucified and risen, for himself. And his mind would only be settled that this was the real Jesus if he saw and touched Jesus' wounds from his torture and execution. Jesus provides the assurance that Thomas seeks. His belief is expressed as an act of worship, "My Lord and my God!"

This is not about trumping up faith so that it looks like certainty. No matter what we say about Thomas, worship of the risen Christ is something we do by faith, not by sight. Many come to faith not because of any well meaning witnesses, but because the Lord appeared to them, the Spirit called their name. And in that encounter, there was surrender, trust, wonder, and worship. We cannot do this believing thing on our own, or by trying harder. A desperate father once told Jesus, "I believe, help my unbelief." (Mark 9:24) That could be the prayer of every one of us.

This station invites us, along with Thomas, to be a little "lost in wonder, love and praise" every day of life! Peace be with you.