Being chosen is rarely what we think (10) 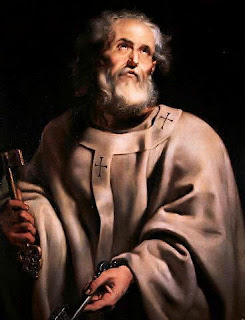 Maybe we want to think that God loves us because we're so cool and so lovable. Or at least, we try harder, like Avis. But with God in Jesus, it is about grace, freely initiated and generously offered. God is the essence of "pure unbounded love." So God's motivation resides within God's own character of goodness and grace.

Peter is truly grieved when Jesus keeps asking him if he loves him. Is he reminded of his three-time denial when Jesus was being held for questioning? The impulsive one has a chance to undo his denial of Jesus with his own threefold declaration of love. There is, however, a catch. Peter is no longer passive recipient of grace. Jesus' imperative to "tend my lambs," and "shepherd my sheep," and "tend my sheep" is wrapped up with the finality of "Follow me."

Peter has come a long way, of course. Shepherding and tending sheep will be a hard life, because lambs grow up to be big sheep that bite and resist guidance. They don't know how to care for themselves. No longer is it all about Peter's faith or lack of it, or his confession of Jesus, or anything Peter has said or done, or failed to do or say. Now it's about fulfilling his call, a ministry in which he will be led to strange, non-Jewish places and unclean people- and a death- he would never choose on his own. (John 21: 18-19)

Do you hear the "follow me" differently at age 45 or 55 than you did at say, 22 or 32? Don't you know that Jesus' summons in early ministry is heard very differently by the time we're at the second half? Whatever happened to congregations, church officials, committees, and boards who once smiled at our youthfulness and high enthusiasm? Some encouragement was genuine, some just flattery. For the most part though, people were eager to mentor us, to give us their attention. We would make stupid mistakes, but we tried to make up for inexperience with energy and persistence.

Much the same way Moses couldn't enter the promised land (Deuteronomy 34), later we discover that being called is not about us. It is about stewarding my gifts for others, for generations I will not even see. At any age, I am blessed when I am able to the hear voice of the One and Only calling and claiming the one and only me, with all my gifts and liabilities and possibilities.