Holy Saturday and the Young Man (2) 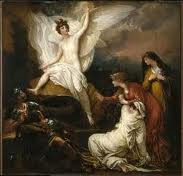 And they all forsook him and fled. And a young man followed him, with nothing but a linen cloth about his body; and they seized him, but he left the linen cloth and ran away naked. Mark 14:50-51
And entering the tomb, they saw a young man sitting on the right side, dressed in a white robe; and they were amazed. And he said to them, "Do not be amazed; you seek Jesus of Nazareth, who was crucified. He has risen, he is not here; see the place where they laid him. But go, tell his disciples and Peter that he is going before you to Galilee; there you will see him, as he told you. Mark 16: 5-7

Appreciating the twists and turns in John Mark's own story is yet another way to explore the young man in these two chapters of Mark.

Joseph Webb in his great Preaching Without Notes, coalesces Mark's own biography from Acts and the New Testament Epistles. This final piece of Webb's leads me to believe that the young man in Mark is none other than John Mark himself, the one who, as a young man in his twenties, ended up "deserting" the Apostle Paul on the first missionary tour. Acts 13:13.

In fact, when Paul wanted to re-visit those churches in a second tour, Barnabas and Paul split up over Mark. While Barnabas wanted to take his cousin Mark with them, Paul labeled Mark a deserter. Whether that is Paul's or Luke's wording, it doesn't matter. It was public information. You could have found it if the church had the internet and searched the keyword "deserter." The "sharp" disagreement that Paul and Barnabas had over Mark could have only ended in an ultimatum, in words like, "We will take Mark over my dead body!" Acts 15: 36-41
After about ten years pass from the date of the second missionary journey, John Mark resurfaces in three amazing Epistle references. Philemon 1:24 mentions that Mark is among those who are with Paul while he is prison. In Philemon, Mark is mentioned as a "fellow worker," along with Epaphras, Aristarchus, Demas, and Luke. And Paul sends their greetings with his own. In Colossians 4:10, a similar greeting from "Mark, the cousin of Barnabas" is included. Incredibly, Paul includes this about Mark: "concerning whom you have received instructions- if he comes to you, welcome him." Another way of saying, "Regardless of what you've heard about him in the past, welcome him now as you would a brother." Wow!
If Mark's "young man" is indeed himself, and I think he is, then his own story of a rather well-known failure at least parallels, if not rivals, that of the original twelve, all of whom scattered before their arrested Lord amidst a mixture of terror, denial, and betrayal. Though the man we call John-Mark was not in the company of original disciples, he still saw himself as among those who "deserted" their Lord, even as he was once labeled by the church. Like the young man who both runs away, and isn't seen again until Easter Sunday, Mark "comes back" from his pain and humiliation to be one of Paul's most trusted co-workers, probably staying with Paul until his last days. He became faithful until the end, and beyond it.
The young man who fled in fear reappears on Easter Sunday, this time arrayed in a dazzling white robe. Early Christians were clothed in a white gown after their baptisms. It is the birthright of all Christians, that through the terrible decisions and public humiliations of our past, regardless of the specifics, God continues to offer us love and grace. The Easter life God always gives to us in Jesus is one of come backs, rebirths, second chances, and resurrections!

In fact, Mark becomes the writer of the first Gospel of Jesus Christ. This amazing story is the subject of the next post.
- April 07, 2012