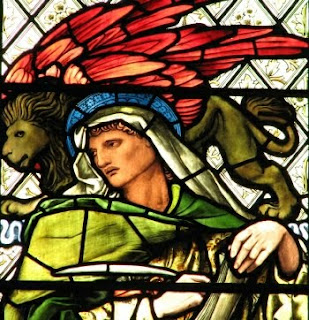 And they all forsook him and fled. And a young man followed him, with nothing but a linen cloth about his body; and they seized him, but he left the linen cloth and ran away naked. Mark 14:50-51
And entering the tomb, they saw a young man sitting on the right side, dressed, in a white robe; and they were amazed. And he said to them, "Do not be amazed; you seek Jesus of Nazareth, who was crucified. He has risen, he is not here; see the place where they aid him. But go, tell his disciples and Peter that he is going before you to Galilee; there you will see him, as he told you. Mark 16: 5-7
Although some commentators may discount the connection between the "young man" of Mark 14:51 and Mark 16: 5 as speculation, for me, the parallel is almost too easy to miss, and Mark included these two important references for a purpose that the other gospels do not recognize. The young man is not in Matthew or Luke or John, even though the Gospel of Mark is the earliest of the gospels and predates the others by ten or more years.
The young man, identified as a follower of Jesus, runs off into the night naked. The would be captors, are left holding the linen cloth. There's an irony here, ridiculing the goons making their capture: just as the heavily armored troops arrest the One who is the Lamb of God, so they, with all their military hardware, are not able to catch this late night streaker.

Will Willimon well- notes the tradition, suggesting this little episode is Mark's prefiguring Jesus' victory over sin and death. Just as the young streaker slips out of the grasp of his captors, so will Jesus give both sin and death "the slip" in his death and resurrection. But even Willimon leaves it there, admitting that the inclusion of this young man in the passion narrative is as much a mystery as anything. He does not make any connections with the young man of the empty tomb.

In a much- loved older volume, written mostly for pastors, Hamilton sees a clear connection with the young man of both the garden and Easter. For him, the character is emblematic of the transformation of our ministry from the the pre-Easter discipleship phase to the Easter-Pentecost of life in the Spirit. The goal of discipleship attempts to copy Jesus, at which every one of us fails miserably. Discipleship finally ends in a mixture of betrayal (Judas), faithlessness (Peter), and scattering (all the disciples). Before that radical awakening, we're gliding along, much like Peter was at his great confession. Mark 8:29

The young man of Good Friday teaches us about ourselves. The young man's running away is also our way of running away from Jesus, and the stripping away of the linen covering is our complete disillusionment with the real Messiah who will be enthroned on a cross. All our hopes for our kind of messiah are stripped from us in the crucifixion of Jesus Christ.

The comment is one of grim reality: we run as fast as we can when we encounter the cost of actually following Jesus and loving the people he loves. It is there we are confronted with the death of our own power and kingdom and glory, and all that we thought would serve us well. But appreciating the twists and turns in John Mark's own story is yet another way to explore the young man in these two chapters of Mark. And so we'll take a look at Mark's story in the next post.