Have I said anything with a stern look or manner, especially on religion?
- Evening Self Examination, 30 Days with Wesley 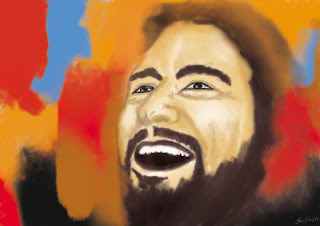 That self-examination is normally a serious subject is why this question about a stern countenance catches me totally off-guard. In the most traditional liturgy for Holy Communion, we pray that we "bewail our manifold sins and wickdeness."

If that isn't a prescription for a self-condemnatory scowl I don't know what is. But just because self- inventory is important doesn't mean we have to start aping the judgement scene from Michelangelo's The Last Judgement.

If you believe that the power that transforms us resides in God's love in Jesus Christ, and the Holy Spirit that is poured into us, then any and all self- examination is a means to greater self knowledge, healing, holiness, and sanctification.

But that movement is blocked when we think we can somehow improve on God's creating us in God's own image and likeness. No amount of moral effort or super seriousness can outdo God's prior gift of conscience placed in us when we were, in love, called out of nothingness into life.

Thomas Merton wrote of "the spiritual man," who "contrives to bully those he thinks inferior to himself, thus gratifying his own ego." The true saints of the desert renounced this approach, he argued. They put both punishment and revenge aside.  Both of these can come in the form of sternness in our appearance and speech.

Self-examination begins and ends in God's love, and when we are not gentle and merciful with ourselves, the practice is side-tracked and becomes an exercise in accusation and self justification. A tool intended to bring us shalom thus ends up becoming an excuse for more self-hate-  or another way to project our sicknesses onto others.

John Wesley's wrestling with self-condemnation and harshness with others like his brother Charles,  whom he felt wronged him, was the shadow side of his zeal for attaining holiness of heart and life in Christ. It was softened, not obliterated, after his heart was "strangely warmed" by God's love and forgiveness.