The problem is NOT belief in God but rather, what God do we really trust and cling to? Because we will become like the God we worship. J.B. Phillips brilliantly named some of our self-made tin gods in his classic Your God Is Too Small.

No matter how many gods you have, they are never enough, and if they are false, we will end up being formed by what is most false and fragmented in and around us.

In the parable of the Two Sons (Luke 15), the older son's attitude over the feast thrown in honor of the younger son's homecoming bursts forth like sore boil: "You never even gave me a young goat so I could celebrate with my friends." (15: 29) 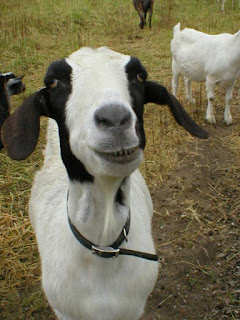 OK, except that young goats are not even comparable to fatted calves. Well, maybe in the mind of bitter older brothers. Like the "Young Spring Chicken" from an old family favorite in my childhood (with apologies to the Dudley Motor Inn in Western New York),  the meat of young goats is lean but neither tasty nor tender nor plentiful.

Rob Bell suggests that the elder sibling has probably been saving this line up for years, and although I appreciate that possibility,  the outburst may have just come to him in the heat of the moment even as it exposes a deep seated resentment of the younger brother.  (Love Wins, p.166)

The younger "prodigal" brother is badly mistaken about his relationship with dad. At the outset, he asks for his share of the family fortune- and only later stumbles into the same thinking shared by his older brother: that the slave/servant relationship is the only hope for his father's acceptance.

The father's words are of course, Jesus'. They come out of the relationship he himself experiences with his abba, his daddy. They're the corrective to our meager, self concerned, old goat theology: "Everything I have is yours." (v.31) There's no thought if there will be enough for everyone, or if celebrating with fatted calves instead of young goats is a waste of precious resources.


The words of the song Magic Penny, was written from a mother for her daughter's dance: "Love is something if you give it away...you end up having more." With God, there is always more because this is the everything that Jesus' Father gives us: abounding grace, filled to overflowing.