Reviewing We Were Least of These 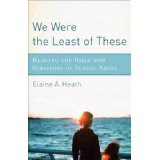 Elaine Heath's We Were the Least of These: Reading the Bible with Survivors of Sexual Abuse is her recent book, published in 2011. The McCreeless Associate Professor of Evangelism and director of the Center for Missional Wisdom at Perkins, Heath explains how the church and its Story can be heard and explored in a healing way by survivors of sexual violence and abuse. Her telling of the Christian Story is authentic mainly because it is done by a survivor, in the presence of the estimated 1 in 3 woman and 1 in 6 men who are also survivors of sexual abuse.
Naming survivors as the least of these is key to the entire study, the hermeneutic Heath applies to the many Bible stories she re-presents and retells in the rest of the book. The words themselves are of course from Jesus' parable in Matthew 25: "We were the least of these, all of us who suffered abuse, neglect, violence of every kind. Jesus was with us; Jesus was in us; Jesus is for us." p.9

Heath's choice of texts, from both the Old and New Testaments, the familiar to the rarely read, is helpful. Included is the Fall narrative in Genesis 1-3 , Esther, the story of Jabez in I Chronicles 4, Psalms of lament, Mary and Judas (John 12:1-11), and the restoration of the "unclean" woman and man of Luke 8.

Heath explores the story of Israel in the wilderness. Why was their journey so frustratingly long? Its length was meant to give former slaves a safe distance from both their former life in Egypt as well as protection from the armies of the Philistines. So, too, survivors, need to relearn healthy boundaries, both safe and protected, that abuse destroys. Moreover, recovery requires healing, and healing isn't instantaneous. Survivors into their 60's and beyond may wonder when they will ever be healed. The good news is that, according to Heath, healing continues. Moving like spirals, we experience deeper levels throughout our lifetimes.

Judges 19 (the Levite's Concubine), tells of the complete rupture of systems and people who are supposed to provide safety and sanctuary. It's what happens when systems like churches and universities live without a conscience, or rather, adopt the sick conscience of the surrounding culture. The story is about the complete failure of keeping covenant at many levels and in many people, including a man of the priestly tribe, a family of origin, and the community at large.

Instead of perpetuating this violence, the people of God will learn to rewrite the story in our life together. In that story, we will no longer excuse or cover up or allow sexual violence: "..the survivor who leaves the abusive relationship will be offered refuge and healing love by her family of origin...They will not hand the survivor over to further abuse... Clergy leaders "will discern the evil of giving primacy to institutions when those institutions become agents of death that violate the sanctity of human life." pp. 46-47

Much of Heath's book would come under the rule, "First, do no harm." That is, "rightly divide the word" so you don't end up using the texts of Scripture to contribute to the pain of others. For example, clinging only to a punitive atonement theory with its angry God, is one example of doing harm. It can "contribute to a damaging interpretation of salvation that drives survivors...away from God and the church." p. 131 Atonement is real. Atonement comes in the form of Emmanuel, God with us, not God against us. Atonement is the healing of wounds, and the making of all things new.

The book includes an outline for a weekend retreat in Appendix 1, and a definition of sexual abuse in Appendix 2. Every chapter ends with a helpful reflection for survivors, for those who companion them, plus suggested exercises, activities, even movies.