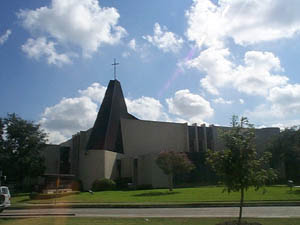 Braeswood's steeple is easy to find and has been at its present location for many years. Not far from the corner of Braeswood and Fondren, surely this area of town has seen its share of change over the last 30 years. It was easy to find a parking space even though I saw no signage for the existence of visitor spaces upon entering. On my walk to the building, I discovered about 30 "VIP" parking spaces designated for visitors. All were used except one or two. There is a more distant shuttle lot as well.
Led by Senior Pastor Steve Banning, who is Anglo and son of the former Senior Pastor Earl Banning, Braeswood is multi-cultural: there are two full Sunday Hispanic services in their Fellowship Hall. The congregation was largely African American and African immigrant at the 10:45 Contemporary service in the sanctuary. This congregation numbered approximately 350, maybe more. The sanctuary with balcony looks like it will hold between 700 and 750. According to their website, the church averages 2,500 weekly.
The bulletin called the "Weekly Planner" consisted of an assortment of
announcements, the month ahead and weekly events. The front featured a graphic of the pastor's sermon series, and a recognition of "Urban Essence," the church's Dance Troupe that had recently won an award. On the back was a personal invitation from Pastor Steve Banning to come up and meet him after the service.

The worship music was almost all up-tempo, hard driving, rock or gospel- not at all the Assembly of God hymnal that I recall from my visits to an Assemblies church when I was in college. The full choir was in the background, the band, composed mostly of rhythm instruments) had a section on the stage left (with some younger string players out front on stage right). The vocalists (8-10) were front and center and were frequent soloists. During one of the worship songs everyone was invited to praise in whatever words they choose. There was no interpretation of tongues during the service.
For the greeting time, members were asked to stand, and the guests remained seated. An usher gave me a Connection Card and I was asked to complete it and return it to the visitor center for a free gift. I was greeted by those around me, and an usher guided me down to meet the Bannings, Steve and Donna, during the greeting time. That was cool.
When it came time for the offering, Steve Banning spoke for about 7-8 minutes of introduction. First he welcomed visitors and told us about the Connection class (three meetings for those interested in more information and when you attend that, you're a member). While he spoke, the ushers remained standing in place with offering plates. An interesting note for visitors was that guests are not expected to make an offering, that it is something for the members only. Well, until at least your third visit anyway. During the offering, one of the members of Troupe danced to the song.
The message from 2 Kings 3 was part of a series by Pastor Steve Banning on "Digging a Ditch: An Expectation of Prayers Answered." This particular message was about God making pools of water in the salty desert of Edom - and delivering the armies of Israel. The NIV states "Make this valley full of ditches." The message was about how we can choose the spiritual atmosphere of worship regardless of our circumstance. The message went immediately into an invitation. People were asked to stand if they were making a first-time commitment to trust and obey Jesus. Those around them were asked to lay their hands on their shoulders and pray repeating the words of Banning. These new believers then came to front to be recognized and welcomed.
One of the things I noticed about this church is that it's very children and family friendly. Youth using their gifts is really lifted up. There are upcoming blessings of college students, children, students, educators, and parents on five separate dates in August. The other thing I noticed is the way this community is reaching out, with real intention, to the unchurched in their mission field, which they define as southwest Houston. The services are webcast off of the website. You can also get a copy of the messages on CD or DVD.

REACH-UP
A commitment to a personal and growing relationship with Jesus Christ through Worship, Prayer and the study of God's Word.

REACH-IN
A commitment to identify and develop God's strategic plan for our lives through our gifts and talents used to build His church and strengthen fellow believers.

REACH-OUT
A commitment to strategically share the good news of Jesus' love with the unchurched in southwest Houston
- July 25, 2011

Our world is so quick to take offense. Making more friends than enemies is much harder work. When it comes to first impressions, I don't...

I offer Spiritual Direction and Grief Support and have received certification in both fields. I have served as a veteran United Methodist Minister in the United Methodist Church, in institutional and congregational settings.