How Long Is Too Long? 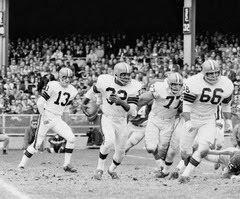 When the football legend of my childhood, Jim Brown, retired from the NFL and the Cleveland Browns at 29, we all were given a prime example of what it means to "go out on top." As stunning as it was, it proved to be, in the end, something that has probably kept Brown's name on top of the record in yards per carry at 5.2. If he had continued for several more years, that number certainly would have diminished.

Football seasons have almost doubled in length since Jim Brown broke in, so many of the records Brown set were bound to be broken. As for as retiring early, Brown is in a small group of Hall of Famers. Most of the greats continued playing a few more seasons and in most cases, with severely diminished skills, even as they tried new teams.

All this, of course, raises the question of the self- chosen limits on our own longevity wherever we serve and ultimately, not only when to move on, but also, when to retire. At what point are we actors and not just reactors? Knowing when to fold 'em is something worth thinking about and not just leaving it to someone else to decide for you. When that happens maybe it has been too long.

The Browns? Life did go on. Leroy Kelly, whose career was less than Brown's (after all, he was the greatest), but who is still enshrined in Canton, Ohio, became the featured back behind his equally talented line (one of which is also at Canton). Kelly was a mainstay for his team the rest of the decade and into the early 1970's.

Most of us will not be the record setters. At the same time, there's a beauty to be able to leave them wanting more, and to know that you gave them everything you had. Life is about taking the next step, in God's love- both for ourselves and the ones we serve.
- September 17, 2009