The No Regrets tour of President's last month in office seemed to be capped off by the last news conference of yesterday, January 12. Many adjectives were used to describe this last performance, including defiant, arrogant, chummy, eloquent, and at ease.

All mistakes in the last eight years were errors in public relations a la "Mission Accomplished," not the action of attacking Iraq on false pretenses, and then occupying it ever since. There was also the heroism of the Katrina rescuers defended not the Chief Executive's passivity before, during, and after a major U.S. city washed away. Not his own concurrent assessment: "Heckuva job, Brownnie."

No mistakes in judgment were made. The sour tone "in Washington" exists but it's not the leader's fault. The divisive politics President has employed the past eight years was something someone else cooked up. "Pay no attention to that man behind the curtain!"

But better PR cannot save the non-reflective leader or undo the harm caused by lack of self-critical awareness. Clergy leaders of all kinds can learn a lesson here. The prayer, "lead us us not into temptation" applies to us. Because the easy way, the wide road, the way that does not lead to life, but denial, is the way of non-reflective leadership.
- January 13, 2009

The Art of Pentecost: A Reflection 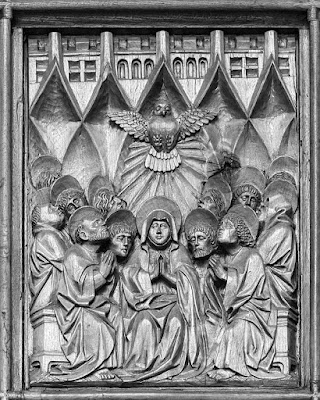